Before & After: The Process of Making a Good Image Great

Last week I told you about what I carry in my camera bag.  That only gives you a small look into what it takes to be a photographer, and that’s just from an equipment standpoint.  Shooting an image is only a small portion of the result.  This week, I will show you some of my personal post-processing techniques with portraits.  Before we begin, I would like to inform you on one of the biggest misconceptions in photography.  There aren’t many instances in professional photography where what you see is what you get.  Anyone who does this for a living uses some sort of manipulation software, whether it be Adobe Photoshop or whatever else.  That goes for any type of photography.  I probably don’t even need to tell you this, but all the images you see of celebrities and models in magazines are all retouched in some way or another.  Sometimes it’s a matter of blemish removal, and many other times it involves slimming someone down or making their skin look flawless.  Most of the time it involves all the above.  It all boils down to perception and how the client wants to be viewed, and in the case of magazines, how the editors want their audience to perceive that person.  Here, I’ll show you how it’s done with a couple of different software programs.

Below is a straight out the camera image of Cassie Hayek shot with a Nikon D810 and a Nikon 105mm f/1.4 lens at f/4.  Some of you may say, “man it’s looks just fine as is.”  But being the perfectionist I am, I’ll show you how to make it look amazing. 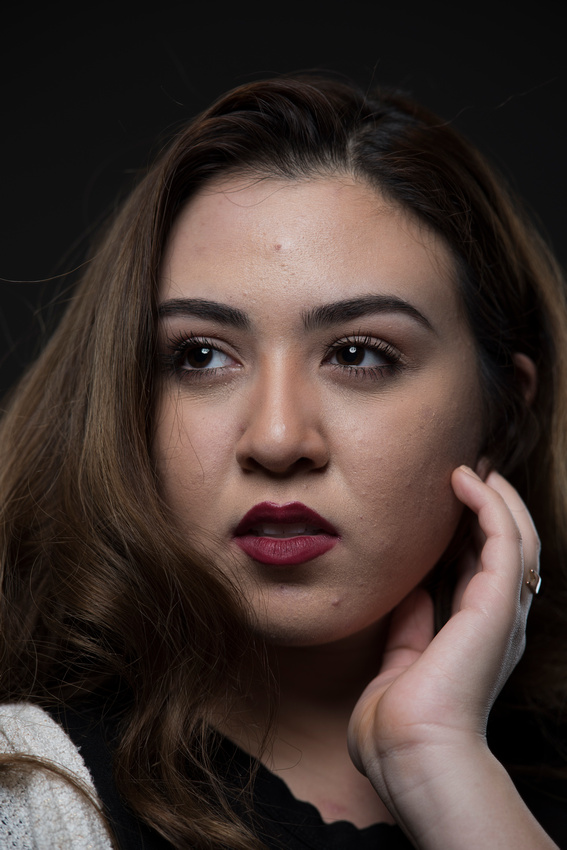 The first thing I do with the image (after putting the images on my network attached storage and cataloging) is to open the image in a program called PortraitPro by Anthropics Lab.  The program asks you to choose whether the subject is male or female, and adult or child.  Once you make your selection (in this case I would choose adult female) the program runs an algorithm on the subject and makes a general determination on where certain features are located, such as the eyes, nose, mouth, and facial curvature.  It’s accurate, but most of the time I need to manually move the waypoints slightly to give a better rendition.  If the waypoints are off, then the adjustments you make have a tendency of bleeding over into portions of the image you don’t want it to. 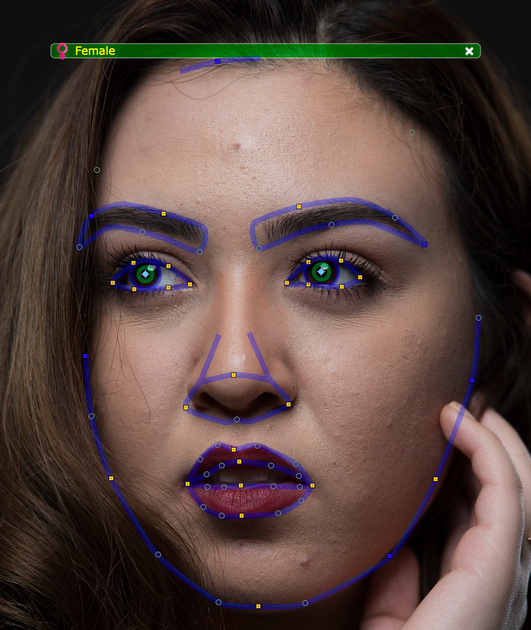 Once I’m satisfied with the alignment, I then determine what I want the image to look like in the end.  Since this portrait is a modeling image and has a glamorous sort of feel to it, I move around the sliders to enhance that look.  Here is the part where all the magic happens.  I didn't really like the overall darkness of the image, and even though it was exposed correctly, I decided to brighten it up quite a bit.  I decided that I wanted to brighten her eyes, enhance her mascara, brighten her lipstick and face, and finally brighten and smooth out her skin without washing out the texture completely. 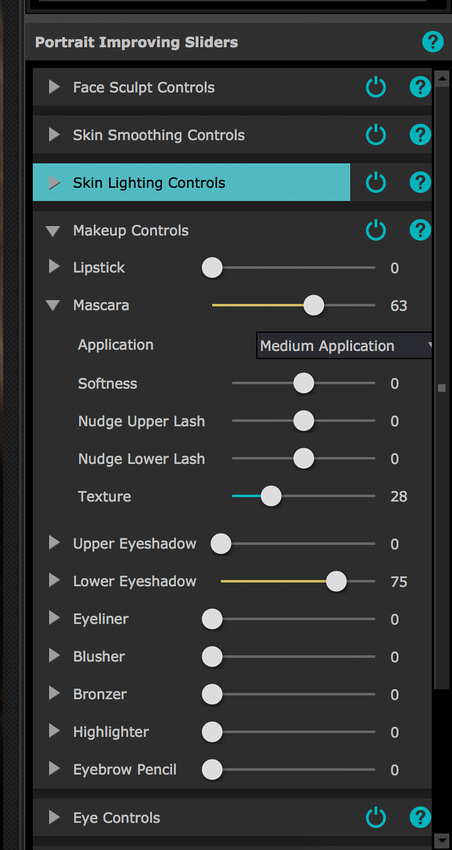 The entire feel of the image changed after making the adjustments.  Before, it looked like a pretty decent portrait, but after it has a dreamy, surreal look to it.  All women want to feel beautiful and glamorous and I’m pretty confident I achieved it in this case.  If I had really wanted to, I could have changed her eye, lipstick, or hair colors but in this example there’s no need.  My focus point of the image was her eyes, and that’s what I wanted the viewers to be drawn to.  After finishing up the Image in PortraitPro, I then export it as a new file.  But I don’t stop there.  I drag that new image into Adobe Photoshop so I can clean up small blemishes, dust spots, flyaway hairs, and add sharpening.  Then I finish up by cropping the image to taste.  Once that part is done I then save the image.  Now we’re done!  Here is the final image. 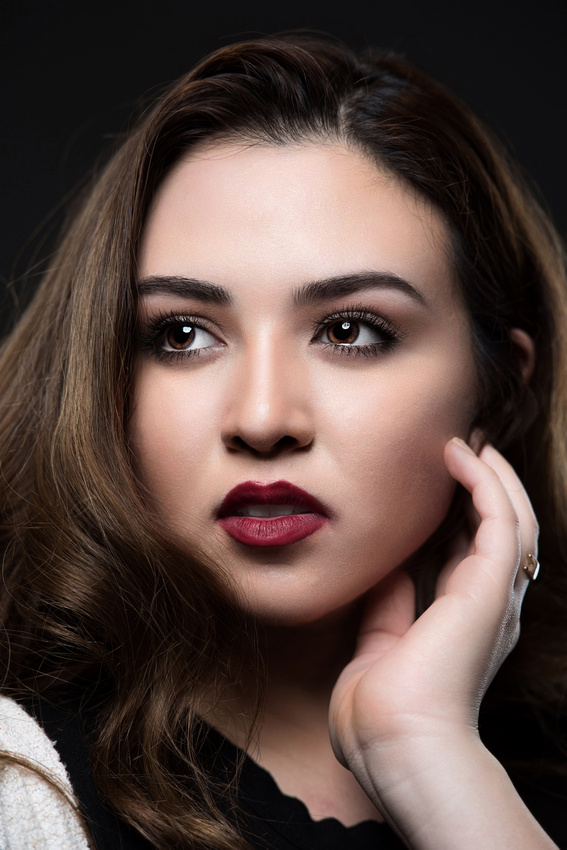 To make it easier to see the before and after, here is a side by side comparison of the original on the left and the finished version on the right.  The difference between the two is like night and day.  Making a few simple adjustments completely changed the overall look and feel of the image. 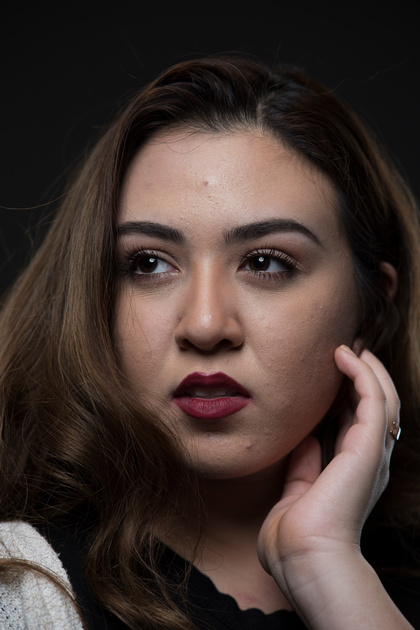 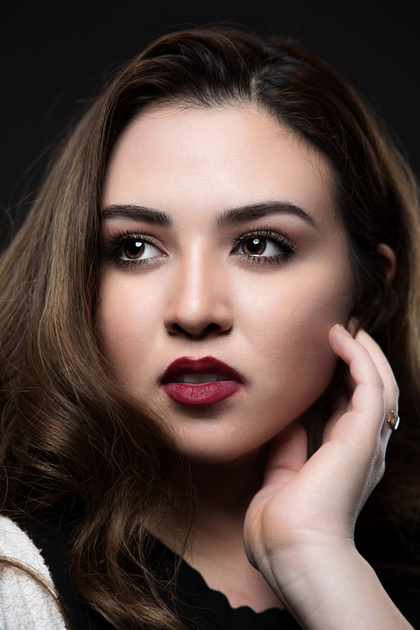 Keep in mind that the workflow I use for portraits isn’t the same as I would use for something such as sports or even landscape photography.  Each one is approached differently.  There are even times when the workflow might change per image from an entire shoot.  It’s all a matter of the look you’re going for.

Although it was a brief, I hope you guys enjoyed this week’s post.  If you have any questions or comments feel free to leave them below.